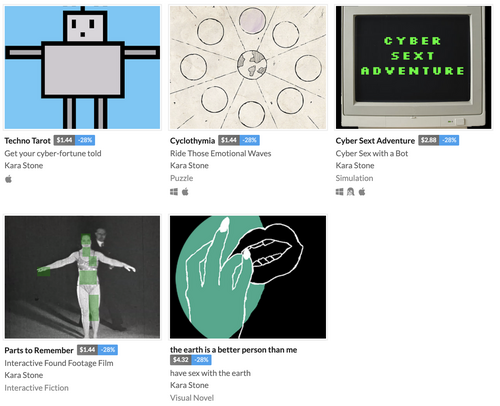 In celebration of Ritual of the Moon coming out in 1 week, I've put all my for-sale games on sale at 28% off! That's Techno Tarot (on desktop), Cyclothymia, Cyber Sext Adventure, Parts to Remember, and the earth is a better person than me.

Techno Tarot is a robot who gives you a tarot reading. All the digital cards are true to the rider-waite deck, with some genders and skin colours changed, and the meanings of the cards are the same, but cyber-ized.

Cyber Sext Adventure is a game where you sext with a bot. Enough said.

Parts to Remember is an interactive found footage film about bodily memory.

I've written about the earth is a better person than me before in these #RitualoftheMoonReflections. It's my most recent game about a woman who finds she can talk to the earth around her - and have sex with it.

So take the week and enjoy these pieces! https://itch.io/s/17429/pre-ritual-sale